A month of critical games is a fun time, but it really kept me busy. There’s lots to think about and analyze, without getting too nit-picky about individual mistakes.  I’m sure these thoughts will trickle in as I decompress over the next few weeks, but for now it’s time to catch up on some sleep and relish what was a great season. 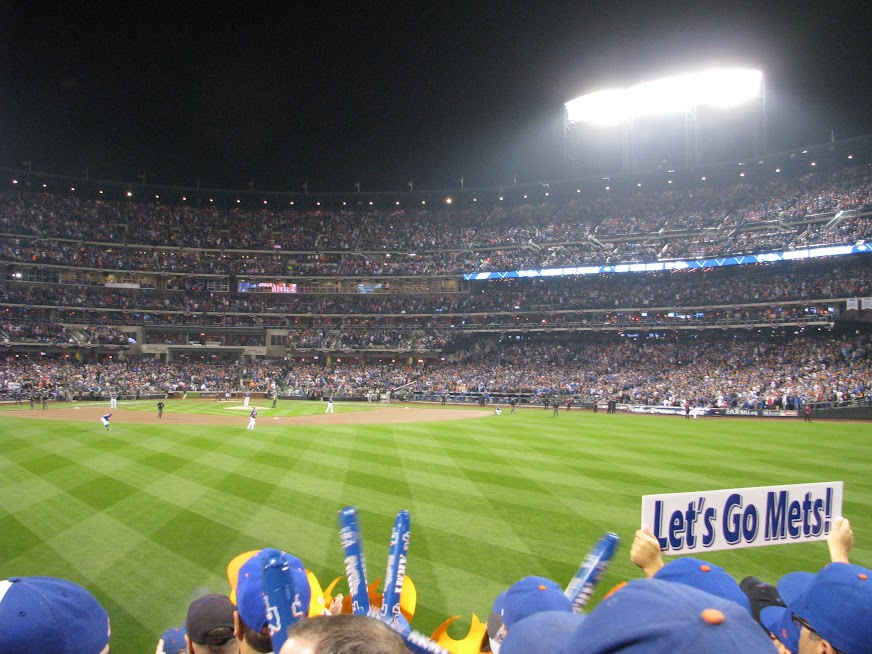 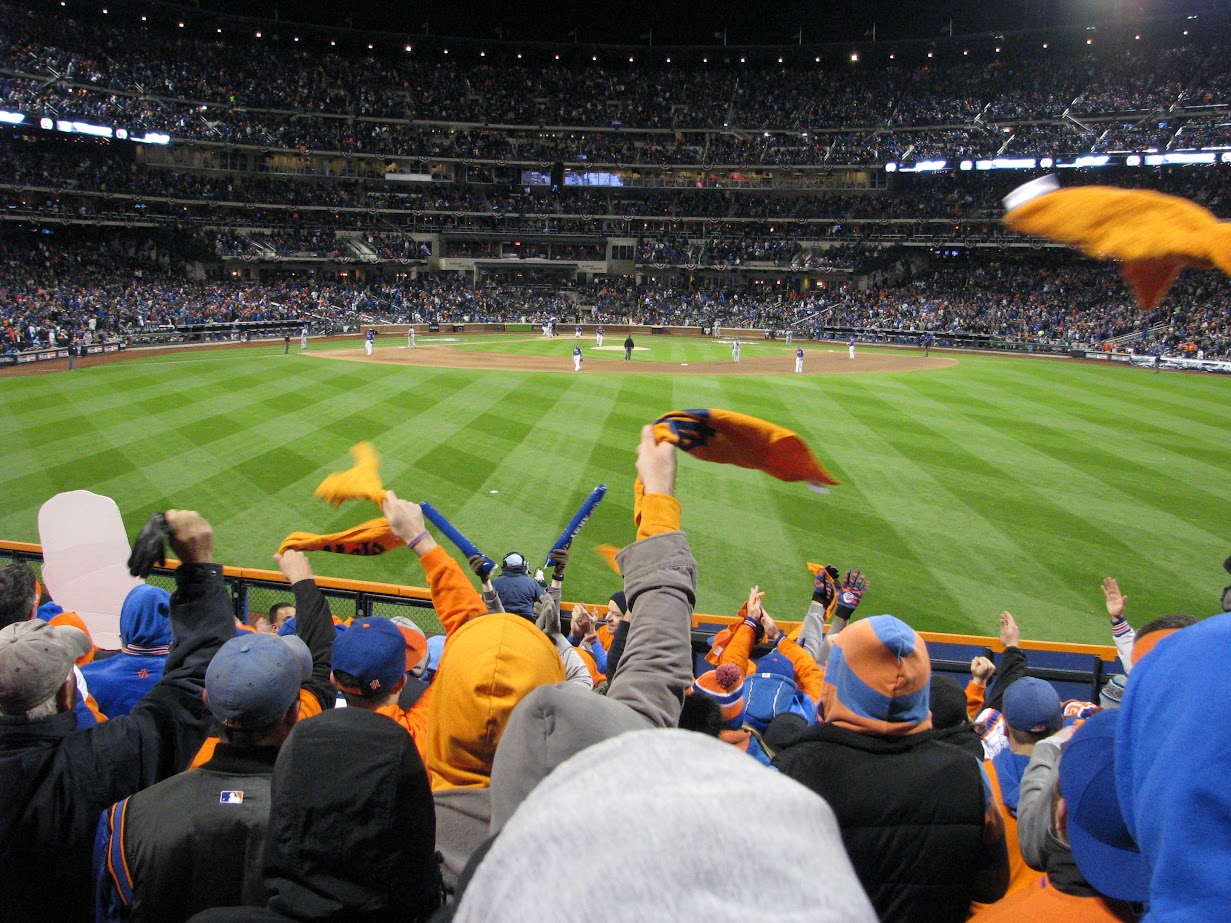 I’m not sure I’m ready. I’m not sure it’s really fully sunk in that the Mets are one series away from perhaps a World Championship. Being a tiny child during the last one the idea of winning it all is this mythical beast suddenly very much real. Dragons are alive and well in Flushing.

In roughly a week the Mets will either be planning a parade or adding a new mortal enemy to the list of teams that we don’t like. There will be players that will be revered as much as Keith Hernandez or perhaps vilified as much as Mike Scioscia and Yadier Molina. The stakes are high.

No matter what you believed about this team, a World Series appearance requires all sorts of things to break right. Just a few months ago we were pondering what it would take to fend off the Washington Nationals, not wondering how the Mets match up against an American League champion.

The World Series has a certain level of awe to it above that of the NLCS. There are only two teams left in all of baseball, just four to seven games left in the entire season. For the first time in 15 years no team will play baseball after the Mets have gone home. The final quest for a third championship begins now.

Ready or not, here we go. 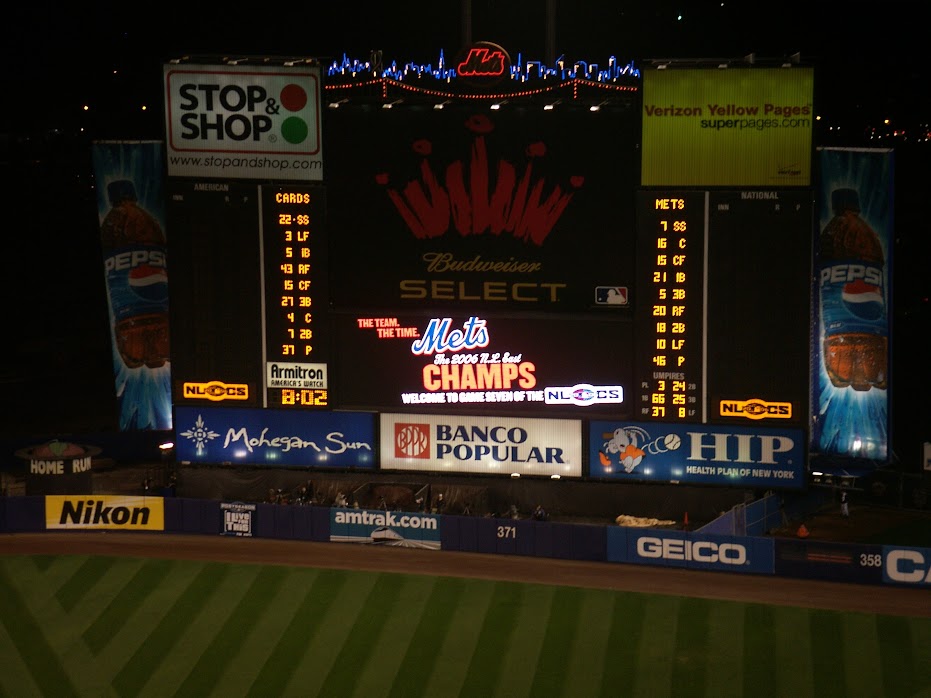 Time sure does fly. It feels like just yesterday we were enjoying the magical 2006 season, but it was truly nine years ago. It was a fun season right up until the bitter end, but that end was so bitter that it took a while for me to make peace with it. With the Mets headed back to the playoffs it’s time to really delve into the last time the Mets were in the playoffs.

It was a good time for me personally; I’d recently started my first ‘real’ job, but was still living with my parents.I had time and money and ultimately ended up at five of the six Mets home playoff games, missing only the first one. At the very last regular season game the Mets gave out a promo called a Fandini, a cross SNY-WFAN item that was part bandana part..weird. I carried it with me for all the games despite not having any idea what to really do with it besides twist it around in my hands nervously during tense moments. When I arrived home after game 7 it ended up tossed in a corner with my rally towel and didn’t move for months. Now I think it’s a drawer labeled “DON’T TOUCH, VOODOO CURSE” with my 2007 and 2008 playoff tickets still in their DHL envelopes.

I was at the end with two friends and we walked out in silence. You may remember it was not that easy to stay together in the crush of jostling fans exiting Shea Stadium, so it won’t surprise you to know that we ended up separated. Somehow the way I went led me past a guy trying to sell me a Cardinals cap. Whether a bum or a Cardinals fan I have no idea. Thanks to the Citi Field construction, we’d parked in Flushing and had to take the subway in silence before taking the car ride home in silence.

I forgot about the Mets for a while and left my stuff where I dropped it. I didn’t hear the replay of Endy’s catch until it was a menu clip on MLB The Show 2007. I’d taken a few pictures but didn’t even look at them as I backed them up and erased the memory card. I really didn’t think back to that playoff series much over the years. It’s probably time to heal and move on. The Mets are going to the playoffs again, and the last time they went was certainly memorable so I want to exorcise any last demons so I can really enjoy this run.

The Mets disposed of the Dodgers so easily that it seemed like they were just going to let all the pitching injuries roll of their back. The most memorable thing from that series was two Dodgers getting thrown out at the plate in one inning in the first game. We were riding high and feeling undefeatable despite some troubling warning signs.

The Mets owned New York too. October 7th 2006 featured a rare event; two NY postseason games on the same day at different times. I was attending a Jeopardy screening at Radio City Music Hall in the afternoon, and the start was actually delayed 10 minutes because the Jeopardy crew was in the back watching the Yankees be eliminated by the Tigers. Alex Trebek came out to tell us the good news about the Yankees elimination, and that we’d have to stick to rooting the Mets. It was the Mets time.

That was a Saturday, and what followed was an extended burial of the Yankees on talk radio and the primitive excuses for social media back in the day. The Mets wouldn’t play again until Thursday thanks to weird scheduling, a sweep, and a rain out. What was actually ticketed as NLCS game 2 became NLCS game 1 on Thursday with game 1 tickets being pushed from Wednesday to Friday.

Game 1 became the Beltran game. The Mets offense that would mostly struggle through the series was held to just six hits by Jeff Weaver and cast, but was outpitched by Tom Glavine. Billy Wagner notched his third save. Not only did Beltran absolutely crush a home run in the 6th off the scoreboard to drive in the only two runs of the game, he had an outfield assist to double Albert Pujols off first in the 4th. This was the coldest I’ve ever been at a ballgame. We were up in the last row of the Upper Deck, with the frigid wind blowing on us the entire game. I didn’t watch a clip of that home run until just now, when writing this paragraph nine years later.

Game two was a slugfest, and one I can’t help but remember as the first round of the So Taguchi vs Billy Wagner war. Taguchi’s 9th inning home run broke the tie and was the deciding run in the game.

Heading out to Shea for game six was the weirdest feeling. I knew logically that winning two games could be tough, that any little mistake or struggle and the Mets would be going home. We were up against it, and in a tough spot. Most seasons end in crushing disappointment and I knew this was no different. The Mets had had a good season, and if they got bounced in six it wouldn’t be the end of the world. They’d fought hard. It’d be a good learning experience.

I remember almost nothing from this game. I remember all the nervous energy and edge of elimination tension. This wasn’t my first game like this; Ventura’s Grand Slam Single had been a similar feel.  The Mets tacked on enough runs to hold off yet another So Taguchi hit off Billy Wagner, and off we were to game seven. That was my main takeaway, “Okay, now we get to come back tomorrow for winner takes all. deep breath.”

Game seven. Where the demons live.. All the talk was about how Oliver Perez had the highest regular season ERA of any game seven starter ever. The Mets had been boxed into a corner with the injuries to Pedro Martinez and Orlando Hernandez, but for the most part the fill-ins held their own. The Mets struck first, thanks to Beltran, Delgado, and Wright, but Oliver Perez gave it right back. Then no one scored until the 9th. It was a tense game, but not especially in the top of the 6th when Perez issues a one-out walk to Jim Edmonds. It was the first pitch to Rolen that was blasted in the air to left that made the entire park suddenly go, “Oh crap.”

Endy made the catch, as you know, and then doubled off Edmonds who was understandably halfway to third. That moment was Shea Stadium’s final exaltation. The unbelievable catch has everyone as fired up as they’d been since Mike Hampton’s clinching complete game over the same Cardinals back in 2000. It was hard not to get swept up in that joy, in that belief that hey, this Mets team really could do anything. It was hard to believe they could lose after a catch like that, after a moment like that.

That feeling lasted maybe a half inning. The Mets mounted a rally against Jeff Suppan in the bottom of the 6th, with none other than Endy Chavez coming up with two outs and the bases loaded. The moment was perfect, how could Endy not come through again, this time with the bat? Greatest catch of all-time, clutchest player in Mets history. There would’ve been no end to the superlatives.

He didn’t come through of course. No matter how many times I see highlights from that game, he never does. Baseball stories don’t always fall in with those seemingly perfectly scripted moments. The game would go differently if the Mets scratched a run across there. Instead of Aaron Heilman in the 9th, it’s Wagner for the save. Perhaps Wagner would blow it too, as he hadn’t been great all series, but we’ll never know.

The season ended, and it was a few days before I was right again. Eventually I looked forward to 2007 and thought of 2006 as a stepping stone. I started writing about the Mets more, and they bounced back by sweeping the Cardinals in the first series of the season, making them 6-4 against them over the last 10. The Mets were 34-18 after May ended, surely 2006 was just a stumble.

We suffered a lot as Mets fans during that time. Looking back with the cold clarity of nearly a decade reminds me to be thankful for what we have right now; a legitimate chance at a championship and also a very real possibility that this might be the best Mets team for a decade. I don’t expect either to be true, but knowing that either might be helps to give me the proper perspective on 2015. Enjoy what’s already happened, enjoy what’s going to happen, and don’t pretend it won’t suck if they don’t go all the way.

Simple, yet colorful. Blue and Orange.